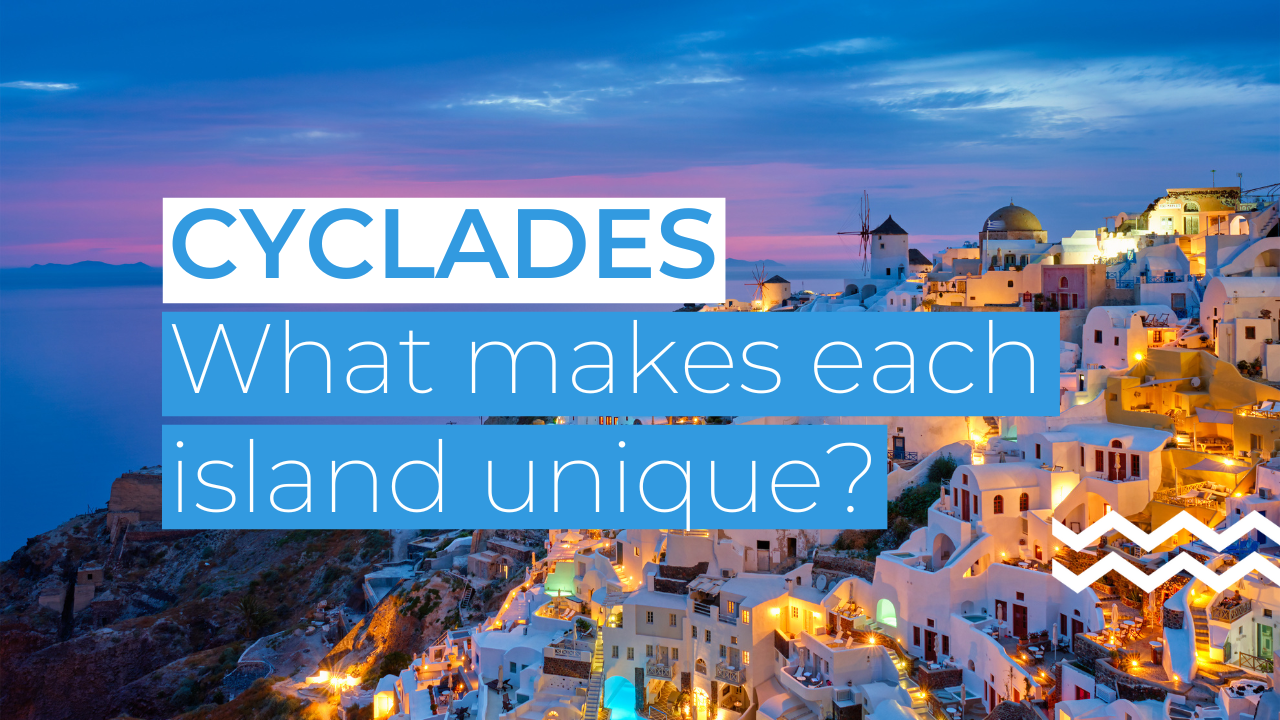 CYCLADES: What makes each island unique?

Now that the cold weather has set in and you are sitting quietly by the fireplace, let’s recall the summer, the salty sea, and the hot sun.
Your mind traveled already to some greek island.

Maybe a Cycladic one? Of course!

The most famous island group in the Aegean Sea comprises some of the most beautiful islands in the world! Gorgeous sandy beaches, architecture in white and blue, traditional lifestyle, folk music, warm, hospitable people, and barren landscapes with isolated chapels turn a trip to the Cyclades into a lifetime experience.

The name “Cyclades” refers to the islands forming a circle (the name in English means: “circular islands”) around the sacred island of Delos. According to Greek mythology, Poseidon, God of the sea, furious at the Cyclades’ nymphs turned them into islands.

But, let’s take a look at some of them and what makes them so popular.

An ideal destination for those looking for a cosmopolitan holiday setting, with luxurious hotels that are constantly being upgraded, gourmet restaurants and taverns with local flavors highlighted by amazing local products, and of course hundreds of balconies with a wonderful view of the Caldera.
The beaches are not its strong card, but it has an intense nightlife in Fira and the beaches, and several wineries to visit.

The reason that makes it stand out from the other islands is its volcano that erupted in 1600 BC. and collapsed into its own crater. The island was destroyed by the powerful explosion and only its outline, today’s Santorini, remained of the ancient Strongyli. Santorini also has a unique heritage of folk traditional architecture, in its settlements and sophisticated fortified settlements.

Known for its enchanting sunset and its “black” beaches with volcanic rocks that give it a special character.

An island that is something like a hangout for initiates. Either you’ll love it and become a “permanent Amorgian” or you’ll see it as one of those barren islands that you just have to get to know.

It has a beautiful Country that will win your evenings. Everything you need for party nights and rakomelo (from raki + meli, meaning honey), a Greek mixed alcoholic drink.
Bathing in Amorgos means exploring its small rocky coves and diving into the endless blue.
It stands out for its archaeological wealth, folk architecture and art, and local customs.

Known for its camping, its alternative vacations, and the nature trails that invite you to explore them.

It has unique beaches, hundreds of chapels, and Byzantine monasteries.
In Ios, in addition to fresh fish, you will have the opportunity to taste excellent local cheeses, goat meat, and vegetables from the gardens.
What will stay in your mind if you go is how harmoniously the ancient Greek elements and the newer, traditional architecture have been combined in the settlement.

In ancient times, Ios was one of the islands that claimed the origin of Homer and it was even believed that the greatest epic poet of all time was buried here.

Known for its wild nightlife and the young people that come to the island every year.

Anafi is one of the most beautiful islands of the complex as it manages to keep its natural beauty intact, with many beautiful beaches with golden sands and deep green waters.
Anafi remains an island far from the pace of modern development.
Its 300 permanent residents are concentrated in the island’s only settlement, Chora, which was fortified with a castle during the Venetian period.

Known for its peaceful holiday, pristine natural environment, and simple way of life close to its hospitable people.

The low-profile Antiparos has raised its head in recent years to its secular neighbor. Especially when the networks of the whole world broadcasted the holidays of Tom Hanks on the island, it has seen its tourists multiply. And not without reason, since it has beautiful beaches and the streets of Kastro, the only settlement on the island, are decorated with bougainvillea and geraniums that makes it extra pretty.

What makes it unique is the famous cave, on the hill of Ai Giannis. A stalagmite of impressive dimensions welcomes visitors at the entrance, while the dimensions inside the cave are equally impressive. Ideal for kayaking excursions.

Known for its laid-back, all-day beach holidays, the open-air disco, and the alternative camping.

Born from volcanic eruptions, it has the most impressive colors and rock formations in the entire Aegean. Its beaches are equally colorful and impressive.

Counting 75 beaches, the island has both easy and accessible sandy beaches, as well as more “adventurous”, unusual seascapes.
Rocks that look like sculptures, compose an unusual “lunar” landscape, natural stone arches, and a relief bottom that will impress you.

Rocks and minerals were and are one of the most important wealth-producing sources of Milos. Already in prehistoric times, the inhabitants prospered from the trade of obsidian, a hard stone with which knives, blades, arrows, and other tools were made.

The Archaeological Museum of Milos is home to many remarkable finds, but the most valuable of all, the Venus of Milos, is housed in the Louvre Museum in Paris.

Known for its deep blue beaches, the most delicious, traditional food and the statue of Aphrodite of Milos found in a village on the island.

Mykonos is without a doubt the most famous island in Greece and the most popular destination worldwide.

Temple of the secular, capital of food & clubs with transfers of top Athenian and international chefs, restaurants, clubs, and d.js.
It is one of the first islands in Greece that utilized its natural resources for tourism. In the mid-1950s, they began to create the appropriate infrastructure to serve the needs of vacationers. Thus, Mykonos became a fad that never passed and established itself as the island of celebrities.

But beyond the cosmopolitan side of Mykonos, there is also its quiet side. If someone wants moments of peace and relaxation, Mykonos will not disappoint him since it has quite quiet villages and deserted beaches.

Known as the island of the winds, it stands out for its cosmopolitan air and luxury holidays.

It is the capital of the Cyclades. Its neoclassical mansions are so well-preserved and so elegant that, because of them, the island has been described as the “Princess of the Aegean”.

Stately and remote, the capital of the Cyclades does not gather crowds of vacationers for multi-day vacations, but an eclectic weekend audience.

The beaches are not many, but they are all beautiful, while the settlements retain their nobility and traditional color.

Known for the unique aesthetics of the island that has refused the blue-white of the rest of the Cyclades, and for its traditional sweets, loukoumia.

Only when you discover its hinterland do you understand why it is a haunt of intellectuals and artists and a paradise for those looking for a low-profile holiday.

Tinos is at the center of religious tourism since thousands of believers from Greece and from all countries of the world come here every year to worship the miraculous icon of Panagia Megalochari, located in the church of the Annunciation of the Virgin.

However, in recent years it has also become known for recreational tourism, beaches, and nightlife.

An important element of the cultural identity of the island is the marble craft, which flourished in Tinos since the years of Venetian rule.

Known for its religious tourism, history, and customs.

The Cyclades islands are the crown jewels of the Aegean Sea, and you have to visit at least one of them every summer in order to get a taste of Greece and of an unforgettable summer.

We are setting sail for the Cyclades!