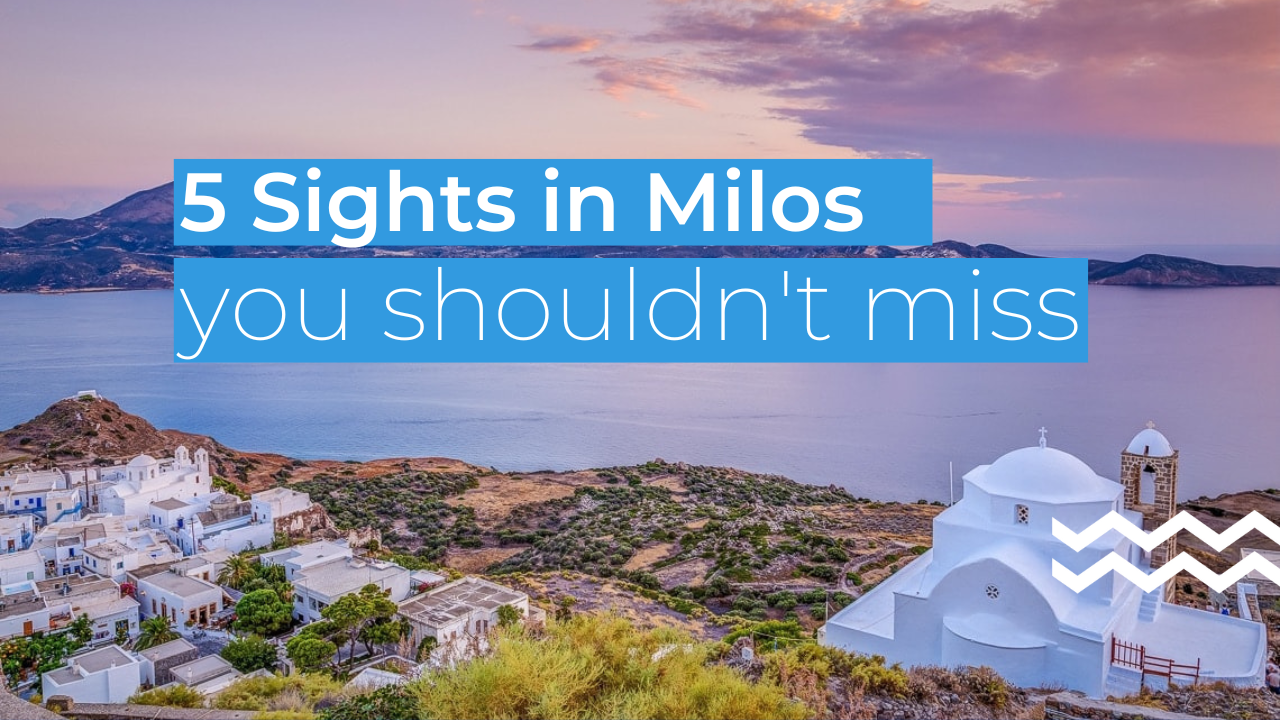 5 Sights in Milos you shouldn’t miss

Are you considering Milos for your next vacation? READ THIS before you come, if you don’t want to miss anything!

The ancient theatre of Milos, built on the slope above the old port, gazes at the endless blue. It dominates among the ruins of the ancient city which is little archaeologically researched.

The theater was discovered by chance in the 18th century, while the first excavations were carried out during the two years 1816-1817, by the German architect Carl Haller von Hellerstein.

It is a luxurious theater of the Roman era modeled on the ancient Greek theater. It is estimated that it functioned until the 4th century and later its premises continued to function as residences and workshops. The ancient theater of Milos was made of white marble.

The ancient theater of Milos is one of the best preserved theaters of the Cyclades. Even if its largest part remains buried, it is a part of the cultural heritage and a “bridge” that unites ancient Greece with the modern one.

The catacombs were found in 1844 and it is estimated that they were built towards the end of the 1st century.

There are three in total and they are found underground, situated 150 meters above sea level.

Christians built the catacombs here since it seemed to be a good location to hide from their Roman persecutors.

These catacombs were not just places to bury the dead. They were also used as Christian churches during the time when Romans were persecuting Christians.

These catacombs show that Christianity spread early on the island of Milos.

The first people to find the catacombs were not archaeologists, but illegal antique dealers who discovered them in 1840 and decided to pillage them.

The catacombs are full of labyrinths so that the Romans could get lost in them. This was a way to protect the bodies from their enemies.

They were mostly decorated with natural jewels and pictures.

There are unique inscriptions, names, and traces of paintings that can be found on the walls.

There would have been more information about the inscriptions if the humidity had not eroded them. Pirates, locals, conquerors, and travelers did not help by repeatedly stealing stuff from these catacombs. They almost took the tombstones as well.

Today, you cannot visit all of the catacombs. You can only take a tour around the arcades.

Milos is home to many churches and monasteries that dot the countryside and its settlements. The architecture and style is gorgeous drawing special attention from the visitors.

The church and the town were abandoned due to a devastating earthquake that took place in the 18th century and many of the holy icons and parts of its splendid interior decoration are found today in the new church which was built for the Assumption of Mary in Adamas.

The Greek Ministry of Culture registers Panagia Portiani as a listed monument and inside it visitors can admire stupendous mural paintings and several other relics.

It is located in the remote area of Kipos in Milos. The church was built in the 5th century and it is considered one of the oldest Byzantine churches on the island.

Its location offers beautiful views of the natural wilderness of Milos and it is also a great option for sunset seekers.

An interesting fact about this church is that a marble piece coming from an ancient sarcophagus was used in order to build it.

It is located on a hill above the bay of Agios Ioannis, on the western part of Milos island and only a few monks live there today.

According to myths, this monastery was the sight of a miracle: in the Medieval Times, some locals had locked themselves inside this monastery to protect themselves from an attack of pirates. They prayed to Saint John and at that time the wooden door turned into iron, which is how the monastery took its name (Siderianos in Greek means iron).

It is located near the port, in the center of Adamas, and its interior houses the Ecclesiastical Museum. Agia Triada has been standing there for more than one thousand years and it is believed to have been built before the Iconoclasm.

Panagia Korfiatissa is located on a breathtaking site in Plaka. It was built in 1820 with building materials brought from the abandoned churches of the old main town and it is dedicated to the Virgin Mary.
Nowadays, it is the cathedral of Milos and the Ministry of Culture regards it as a listed monument since 1936.

The Castle was built in the 13th century on the hill of Prophet Ilias, at the northwestern end of the island where Plaka is today.

Today it is not inhabited, but it offers its visitors a view of incredible beauty across the entire bay of the island and one of the most beautiful sunsets, which will reward your effort to climb to its top.

This Venetian Castle was not surrounded by walls, like most Cycladic castles, but was protected by the houses themselves. In practice, the castle was used to protect the locals from pirate attacks (a frequent phenomenon of the time), as well as to control the movement of ships in Adamantas Bay. At its top, in the “Middle Castle”, was the Ruler’s Tower, the so-called Palace, and around the tower were a few houses.

It was founded by the first Duke of Naxos, Marco Sanoudos, and inside were mainly the residences of the Duke’s guardians and retainers, as well as other relatives and Franks.

The museum is located in Plaka and it was designed by E. Ziller.

After several renovations, it opened as a museum in 1985.

At the entrance of this building, there is a replica of the famous Venus de Milo.

Inside the museum, you can see prehistoric finds from Pylakopi, sculptures, reliefs, obsidian tools, and inscriptions.

You can also find works done by local potters and local painters, statues, and coins as well.

This is an underground museum, housed in the bunker where the Germans had a hospital in 1943 when Milos was attacked.

It is housed in a 200-year-old house located in the courtyard of the church of Panagia Korfiatissa, on a hill in Plaka.

This small museum has few rooms but interesting exhibits that depict daily life on Milos island from the 17th century till a few decades ago, including traditional costumes, agricultural tools, handloom, kitchen utensils, and old furniture.

This museum compares and contrasts sand samples from all over the world with the ones from the various beaches of Milos.

Ok, now you can confide in me if you missed something.

And if you can’t make it now, because your vacations are over,  we are waiting for you again next year on our island.